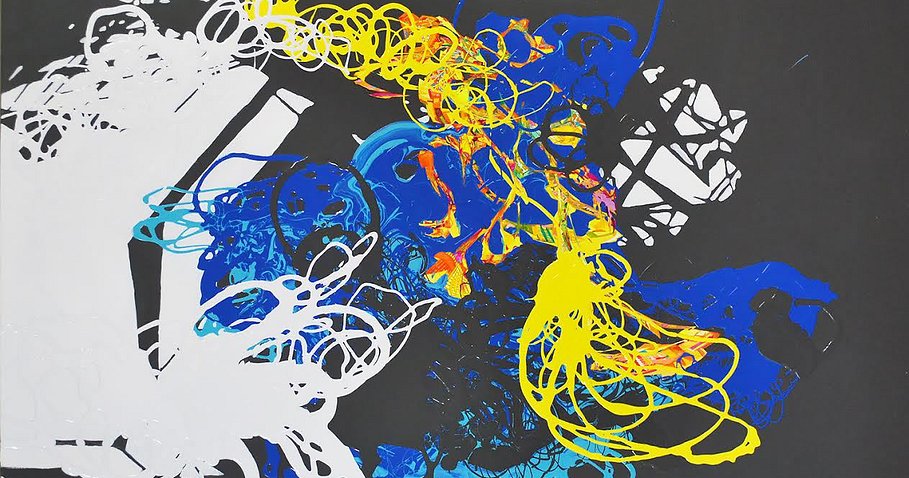 The paintings, installations and video works of Hollis Cooper are invested in the haptic and the optic construction of space in a way that privileges neither while questioning both. Her compositions act as a recursive loop that joins the digital and the painterly in a series of complex mediations between memory, found materials and innumerable acts of aesthetic transduction. Cooper’s works remind us that ‘the virtual’ is not just a hypothetical construction, but that we encounter the production of virtuality all around us as a series of visual tropes, cultural memes and rhetorical devices. Much like her immersive environments we find ourselves encircled by the digital aesthetics of cinematic seductions, scripted spaces and technologized environments, or what many theorists now refer to as a culture of remediation.

By folding different digitized spaces together — spaces from internet chat rooms, videogame backgrounds and various forms of theoretical architecture — Cooper’s work engages in a kind of radical geometricism that points to the instability of ‘the virtual’ as a well defined local. In fact, her painterly installations insist upon a type of shifting presence that is determined by the interplay of the viewing situation as well as the orchestration of technological motifs, nexus effects and deconstructed systems of representation. The introduction of moving elements, of new framing devices, and an open dialog between the structures that define her work all point to the permeability of forms and even the repurposing of institutional elements.

One could even say that Cooper’s hyperbolic vivisections of architectural and computational space show us how the virtual is commiserate with Deleuze’s interpretation of the term, where the virtual is conceived of a series of potentials within the real that are irreducible to the structures that condition their appearance. Rather, Deleuze provided us with a vision of the virtual as a paradigm of compossibilities that unfurl and unfold all around us in anti-systematic, anti-linear and anti-teleological ways. Such a notion of mixed topologies; of visual events taken as so many forking paths; and of the type of dynamicism that issues from the neo-baroque theatrics found in Cooper’s imagery could be thought of as allegories of the anti-Cartesian urge.

Only, we might even go so far as to say that her latest works provide us with a contemporary version of Plato’s cave as we find ourselves transfixed in a wholly different context for thinking about the allegories of modernism as well as the architectural inheritance of postmodernism. Only, instead of being mesmerized by the false shadows cast on earthen walls we are entreated to contemplate the projections of super-modern affects within the most virtual of all modern spaces, the white cube. In many ways Cooper’s artistic practice could be characterized as a type of cartographic cataloging that takes emergent properties and proliferating mutations as its given subject. And yet, with the evolution of her work even these pictorial anomalies find themselves displaced by so many generative derivations, ultimately giving us a spectrographic language that represents a hybrid disposition toward the use of painterly and digital motifs which are themselves, subject to the logic of multi-dimensional embellishments.

Such a cacophony of visual paradoxes makes us question how we think about the ways in which space is structured while the phenomenal complexity of her works asks us to activate our perception of the living present in order to map its constructed measures as naturalized artifacts. In this way, Cooper's use of different rhetorical tropes, folding structures, plaint graphemes and hypothetical forms plays with the supermodern urge, or what many theorists not refer to as an altermodern perspective, that helps us to reassess both the inheritance of the twentieth century while still pushing up against the boundaries of what technologies allows us to do in the twenty-first. Cooper’s work has been written about as being in dialogue with Marc Auge’s notion of non-spaces, which are the reproducible, malleable and disposable type of architecture of mass industrialization. Only Cooper’s installations allow us to reflect, or even genuflect, before these structures, which are the forms that have become the stock and trade of globalization as an architectural dispostif.

This is why the critical purchase of her work is in asking questions that stretch from the slowest of working mediums in art, painting, to the most rapid type of image production possible, real-time hypercubes. In the stretch between these two medium specific conditions we find our own perception of the present being warped by the infinite possibility of projected designs and the torque of time and space as a manipulated medium. And this too, is not without a certain contemporary resonance with recent developments in the slowing down, freezing, and speeding up of light, not to mention the invention of a warp drive by NASA. If we really are becoming a supermodern culture, than Cooper’s oeuvre not only attests to this, but it asks us to think about the consequences of variability within several different trajectories of art practice from high modernism all the way up to, and including, many of the topological projects that define post-postmodern aesthetics. And for this, Cooper’s contortions of the space-time continuum continue to be a marker of contemporaneity in fine art practices today.

Bio: Born in 1976 in Jackson, Mississippi, Hollis Cooper grew up in New Orleans and Houston before moving to New Jersey, New York, Massachusetts, and finally California. She received her undergraduate degree with high honors from Princeton University, a Post-Baccalaureate certificate from the School of the Museum of Fine Arts in Boston, and an M.F.A. from Claremont Graduate University. In 2006, she was nominated for a Joan Mitchell Foundation MFA Grant Award by the CGU Art Department, and in 2007 was selected for the Drawing Center's Viewing Program in NYC. Her work has been featured/reviewed in publications such as New American Paintings, Art Papers, and Alarm Magazine, and has been included in shows in galleries and museums throughout the United States.